Ender’s Game and Its Influence on Game-Based Learning

Who doesn’t like a good movie or novel, especially when it features a super hero?!? But even though we love our heroes at Legends of Learning, sometimes we begrudgingly tip our hat to a story that carries incredible weight, particularly if it is in our sector. Ender’s Game is such a book (see Common Sense Media’s review), in spite of the author Orson Scott Card’s rather odd personal politics.

Looking beyond Card, the book itself has so many awesome elements and suggestions for game based learning (GBL) nerds like us! It considers all the things EdGames can be, from taking down bullies, learning how to think in zero-gravity and, oh yeah, saving the world. And oh yeah, Han Solo, err Harrison Ford, stars in the movie adaptation. Wait, those are the fun parts of Ender’s Game. In all seriousness, the book offers teachers and GBL developers alike some ideas on how to use video games as a teaching method.

We know that Game Based Learning (GBL) spans centuries. In the Middle Ages, the game of chess served as a military primer for war strategy. Freidrich Froebel created Kindergarten in the early 19th century to teach young children basic concepts through games. Froebel’s influence on primary education today is undeniable.

In the 20th century, John Huizinga’s Homo Ludens discussed games and play as a means to teach, and as a central activity of flourishing cultures. Then in the 1970s one of the first video game successes was released — Pong — creating a new medium for EdGames.

By 1985, when Ender’s Game was released, video games were at their apex filling arcades with tweens, teens, and adults, all eager to play Pacman, Joust, and more. Ender’s Game took the concept to a whole new level (did I mention the current science fiction movie adaptation stars Harrison Ford?) by featuring middle school age children learning through video games, and in-person competition to overcome an alien threat.

GBL in Ender’s Game may have been too good for its own good. It excludes the role of teachers in a blended learning environment (as noted by the IEEE), and there is one thing we know for sure, a game console can’t replace an educator. But GBL has its advantages, and Ender’s Game does highlight them. The learning in Card’s book demanded subject mastery, and not just with the topic at hand (military strategy), but also <ahref=”http://www.forbes.com/sites/alexknapp/2013/09/16/four-leadership-lessons-from-enders-game/#222b15f63f8d” target=”_blank”>soft skills. It also illustrated how various types of games can help students, from hard tests that demanded mastery of military strategy to lighter games that developed logic.

How Game-Based Learning Was Influenced By Ender’s Game 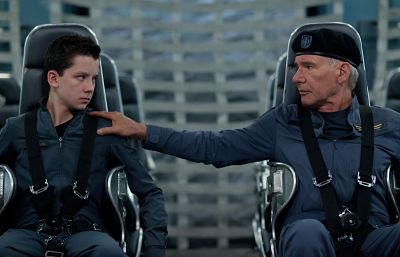 So how does a great read impact an industry? Plain and simple, Ender’s Game helped game developers, educators and other parties envision what was possible. In that sense Ender’s Game informs the GBL movement, much like Isaac Asimov’s robot novels influences today’s robotics industry.

An obvious example would be the U.S. Military. After all, military edgames helped save the world in the book! They look at Ender’s Game as a fictionalized demonstration of what is possible for soldiers that use GBL to advance their skills.

What good is an edgame if it doesn’t teach you anything? Isn’t it just a silly video game at that point (sorry, Pokémon Go fans)? LOL!

In recent years, game developers and educators have focused on bridging the gap between subject mastery and entertainment. Research results from Pieter Wouters and others indicate that when comparing games versus text-based knowledge instruction game-based knowledge is better retained. Other benefits of GBL include flipped classrooms, engagement, and embracing media technology.

Learn About Game-Based Learning From Legends of Learning

At Legends of Learning, we have our own research, but you should expect more on that early next year (yes, that was an over the top tease). One thing we can say is that subject mastery is essential to the very success of any edgame, just like in Ender’s Game. And that is one of many valuable visions that can be gleaned from the novel.

Have you read Ender’s Game? What do you think about its visions?

Our next GBL Influences blog will look at uber edgamer James Paul Gee.